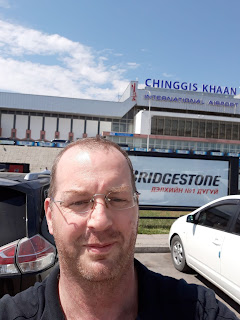 Mongolia is certainly not one of the destinations that is on everyone’s mind or bucket list. Wedged between Russia and China, the country has exciting surprises in store. For starters, it is the least populated country on the planet. While being huge, there are only some three million Mongolians.

RUSSIAN INFLUENCE
Upon arrival at the cute airport, the next surprise awaits. One would think that China would have a huge influence that the language spoken, and signs used would be Chinese. However, it is Russia that has made its mark. It turns out that Mongolians are not in favour of Chinese influence, but are proud of their own culture. Over lunch, one joked that there must have been a reason the Chinese erected that wall. While Cyrillic may not be the first language for most, it is easy to navigate the city. English is widely spoken and many brands that we all know from home are present here. Strolling down Peace Avenue on the weekend is a breeze as the city council closes a stretch for revellers to dance the night away.

FUNKY SOCIALIST
Having been ruled by Russia for a long time, the architecture is distinct funky socialist. It is this architecture that gives the cityscape an exhilaratingly different atmosphere and feel from other cosmopolitan cities. Meanwhile, modern buildings are being sprinkled into the city, housing department stores and five-star hotels. Roof top bars are all the rage and the young population of Ulaanbaatar, or UB as they call it, are having a great time being out and about during the stunning summer. Once winter returns, the temperatures of around -20ºC drive activities back indoors. Grass covered hills encircle the city with stunningly blue skies dropped onto them. Being such a vast and empty country, there is barely any pollution. Admittedly, the power plant being located right smack in the city is unusual though. Even during daytime, the moon can be seen from town.

OFF ROAD FROM EUROPE
For some, Mongolia is the ultimate off-road destination and one can hear a lot of stories from people who have come all the way from Europe in their camper vans. In town for a few days was a German couple that needed their vehicle repaired following a short circuit. They recalled having many great evenings with the locals, drinking tea and making friends. Many people take the opportunity to get out of the city on the weekend for trekking, hiking or camping. Within half an hour one has left the city behind. Standing on top of a hill, looking over the vast landscape, the silence rushing in is giving it a calm that one can only dream of when living in a hectic city that is constantly buzzing. However, here too, modern buildings are being erected and it is apparent that the Mongolians are adapting a city live style, abandoning their traditional nomadic heritage.

NAADAM
July is a special month for Mongolia as it is the time of celebrations. Naadam is the most widely watched festival among Mongols, and is believed to have existed for centuries in one fashion or another. Naadam has its origin in the activities, such as military parades and sporting competitions such as archery, horse riding and wrestling, that followed the celebration of various occasions, including weddings or spiritual gatherings. It later served as a way to train soldiers for battle.  Naadam was also connected to the nomadic lifestyle of Mongols. The three games of wrestling, horse racing, and archery are recorded in the 13th century book The Secret History of the Mongols. During the Qing’s rule, Naadam became a festival officially held by sums - a type of administrative district used in Mongolia. Now it formally commemorates the 1921 Revolution when Mongolia declared itself independent of China. Naadam celebrates the achievements of the new state. Naadam was celebrated as a Buddhist and shaman holiday until secularization in the 1930s under the communist influence of the Soviet Union. In Mongolia, the biggest festival (National Naadam) is held in Ulaanbaatar during the National Holiday from July 11 to 13, in the National Sports Stadium. Naadam begins with an elaborate introduction ceremony featuring dancers, athletes, horse riders, and musicians. After the ceremony, the competitions begin.

LOCAL CUISINE
Mongolians are meat lovers. Beef, lamb, goat, camel and pork are staple items on every menu. Even noodle soups contain so much meat that the question has to be asked why there is a reference to noodles. Barbeques and kebab shops are abundant, but if someone craves for it, there are lots of Western food options. For the more adventurous types, there are Bulgogi pizzas. With an amazingly clean urban space, easy to navigate layout and plenty of walkways, Ulaanbaatar invites to be walked. Working up a thirst, there are lots of pubs and bars around town. Having shed socialism, Mongolians must have looked very far West at another small country as a role model: Irish Pubs are everywhere!

I SHALL RETURN
Ulaanbaatar surely was not on my bucket list, but after a week, UB will surely make it onto my list of places to be re-visited. The openness and friendliness, paired with the ease of navigating the area will make it easy for most to just slip under the blanket of the picture perfect sky and to find a lot of unexpected travel excitement.