Currently I am in Germany, visiting the IAA in Hannover. A bunch of friends from Kuala Lumpur joined. It feels a little like an Asian Invasion with 3 of them wondering around the town of Bad Muender trying to order stuff in English, which no one understands here.

The visit to the IAA was good so far as we have met with lots of clients, people that we know from Asia and new folks that we haven't met before. Some exhibits are exciting. All in all, one can see a lot of very functional booths. I thought the Daimler booth (entire hall) was a bit over the top, but hey!

The weather is a blast, temperatures around 17 Degrees and sleeping with the window open.
Lots of Schnitzel is being consumed. I need a beer now. 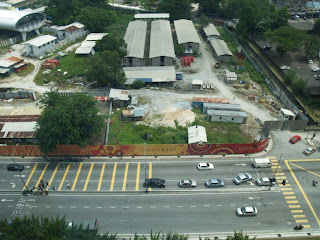 "Klank" it goes this morning. The sound is familiar. It is the sound that you hear when you accidentially drop your motorbike when standing at the traffic light (Embarrassing yourself. Typically happens to those 1,50 tall folks that think a KTM off-road bike is a good idea). Anyway, when I look out of the window, there is a big on the street (In the yellow box, on the far right). I see no rider. I am waiting, scanning the area for the driver to limp out behind the car at the traffic light. Takes me several minutes to see that there is a body about 75 meters back on the road (where the group of people is gathered). It took me to take the wide-angle lens to get the scene in. Driver died while waiting for the ambulance.

Two rapist (having had sex with 13 year olds) were let go in Malaysia. The judges ruled that the fellons had "a bright future and should be given a chance..". Aha. Here is the thing: if you want to commit murder then, it is ok, just make sure you have a seemingly bright future. You'll be alright.

Condoleeza Rice (Acklowledged, I didn't check the right spelling of her name. You know who I am talking about) was on TV giving a speech. In essence about how great the US is. Sure lot's of good things. But then she talked about how amazingly strong the people were and how they overcame the difficulties of the 2008 WFC (World Finance Crisis). Yeah right! We had this "amazing experience" BECAUSE OF THE US! Don't tell me how great the people were in uniting and working their way through it...

Ha! And the funny thing: In seventh grade we had a drawing competition: "how do you think the new European currency will look like?". I failed that assignment as I did not take it seriously. Today I am having a bit of a giggle when I read about the efforts to rescue the Euro. We are heading to Germany in 2 weeks time and for the first time since I am out in Asia the exchange rate isn't giving me rashes and a Curry Wurst is actually somewhere near the "affordable endulgence" bracket of things.

Robert de Niro seems to have lost the ability to pick great movies to play in...

And "Oppa Dunnam Style" (again not bothering with correct name) is a hit.