Nothing new in the East

I just realised that there has been no post for 2 weeks. Kamlesh already mentioned that I have been more active in the past. Now, the idea of this blog is to let all of you know about EXCITING things I am doing.

Currently there is not much happening. I work in Singapore Monday to Thursday, then on Friday I hop on a bus to KL. Once I arrive at 1:00 it is supper and off to bed. Saturdays and Sundays is devoted to Mei Mei and Spike, plus fixing things in the home.
Then Sunday back to Singapore. Over the past weeks I have been to KL many times. Soon the folks at the border crossing will greet my with name when I rock up.

The other day I took a "Super VIP" Bus. Means the seats are reclining and there is a playstation and TV for every seat. Fun...16 seats. This is what happens: The Chinese get on board and sleep. Some Indians watch Bollywood movies. And the German (Me) is cursing, cos the overhead lights are not working and I cannot read. Which I really would want to do. And the reading lights don't work in any of the busses. No matter how much money you pay for the trip (25 - 78 Sing Dolla).

Ahh... travel time. Now that is interesting. Somehow the bus drivers must have arranged and agreed on a time it HAS to take to get from KL to Singapore or the other way around. It always takes 6 hours. No matter where or how often they stop for breaks. Doesn't matter how long the border crossing takes or what the traffic condition is like. ALLLLLWAYS 6 hours. For 360 Kilometers that is. What is the average then???

Our paths have crossed many times. Mark used to work for the Wilkhahn distributor in Indonesia. In 1998 I was working in the Export Department and we have had some conversations. In 2005 I discovered that Mark had been my predesessor in Salotto. We both held the same position.

In 2007 we met again in Singapore, where Mark started his own business (http://www.mtmsolution.com/). Last Friday he opened his new showroom. Wow, what a date! the 8th of August 2008. If you believe in Chinese Astrology and such, this has to be a success. I wish Mark all the best and thanks again for the invite. I hear from Steve, whom I have last seen 2 years ago in Hong Kong, that the party went on for a while after I left.

I also met the Charlie Brazier's wife, whom I did not know until Friday. Charlie used to work for a supplier of Wilkhahn in Sydney. Now that is also a episode that took place 9 years ago. Bumped into Charlie in Hong Kong at a house party. Kamlesh was "working", so we did not have a lot of time to talk. We got to know each other at a luncheon event in Hong Kong too (more than 3 years ago as well...). We have fought a tough battle to vanquish all Heineckens of the planet since, but they simply replicate too fast.

Moral of the story: This world is a small one. Guess when I am 80years old I will keep bumping into people that I have met somewhere in the neck of the woods, in the major cities in Asia or that I have been working with. Very exciting.

Completely Pathetic, starting out lousy and going downhill faster than you can say "Bandage". 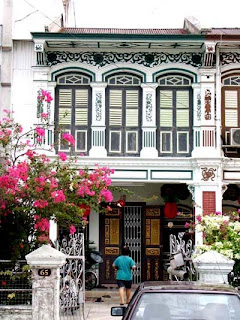 Last weekend I was in Penang, an Island in the north of Malaysia and apparently a powerhouse of manufacturing and such.

The place is buzzing and real nice to explore. There are thousands of these great shophouses. The picture here is "borrowed". Along the busy roads there are plenty of little shops, stuck in these shophouses. There is a mixture of eeriness that you have in movies like Blade Runner or in the streets of Hong Kong, coupled with an upbeat atmosphere that tells you they have something going.

The sad part is that most people don't take care of the properties and many of these beautiful shophouses decay.
Though this adds to the great atmosphere, it is sad to see this happen. If I could, I would buy one of these places, do them up nicely. Live upstairs and Mei Mei can run a pet shop on the ground floor. I would love to have a corner unit with a view of a busy intersection.

The other saddening part is to see a lot of homeless people in Penang. When I was walking around, I saw this skinny old man lifting his mom out of her wheel chair and resting her on the sidewalk to sleep. This is particularly embarrasing and sad if you follow recent news on Malaysian politics, where each party is trying every trick to stop the other one. While the country is suffering (NB: Malaysia has lost a lot of Foreign Direct Investment recently) some people play play. We shall see where that leads.

In the meantime we have learned that we are very lucky with our apartment in KL. New neighbors end up paying twice as much as we do. 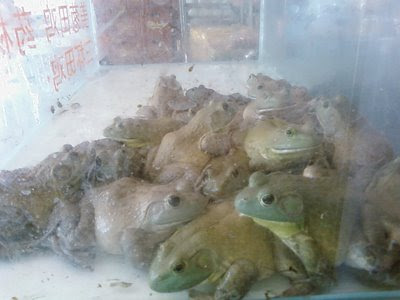