Today I am Red 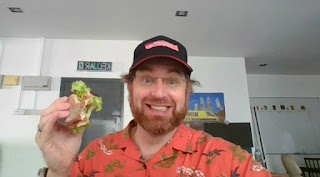 You would have to shave every day when serving in the Bundeswehr. A beard was only permitted if you already showed up with one or if it was long enough after a R&R. There were guys taking leave to grow a beard that would not have to be shaved, just so that they could avoid the daily inspections by the drill sergeant.

I did not really see a need to shave during the last lockdown. No meetings to go to anyway. As a result I now look like the Animal from the Muppet Show. And if that was not hilarious enough... I have been asked to be a model for shavers. Funny to think that soon an entire male population might be looking at my visage when shopping for grooming products...

Meanwhile, I am having a toast. 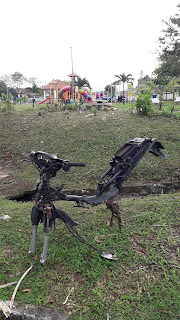 Malaysia is a country full of arts and crafts. It is not unusual to find a sculpture in a park or along the road. Just like this one by E. Honda, which can be found in Subang Jaya. 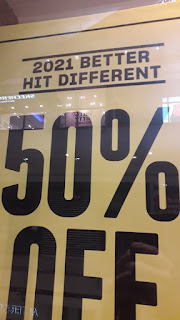 The year 2020 was clearly wild and weird. Some may say it was unprecedented, but I would disagree (see my earlier post on that word).

However, if this sign is an indication of what 2021 is shaping up to be... Well, then good night! I have taken this picture last week and have tried to figure out what the message is ever since... 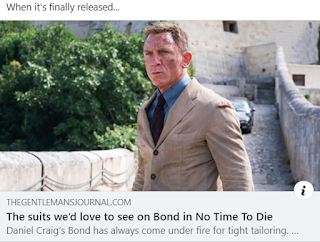 As they keep delaying the screening of the latest James Bond movie, media has taken to milking the fact that this motion picture exists in the most bizarre ways. Not a day goes by where we do not learn something about the main character and how / what / where / when something is going down in the movie.

It is absurd. There is nothing left untouched. Now there are speculations about re-shooting scenes because the products placed by nifty marketers are out of date. Did anyone ever care? I drink Wiskey by the gallon and could not be bothered with the "unique, custom blend and the futuristic bottle " of Blade Runner 2049.

Using this from an internet search: "Information fatigue syndrome – also known as Information overload, intoxication is a term coined by Georg Simmel (1858-1918), a social scientist who postulated that the overload of sensations in the modern world caused increasingly jaded and insensitive people incapable of logically reacting to situations."

Hopefully, nobody will be surprised if this thing flops in the theaters. I don't know about others, but I am certainly tired of the things being surmised about Bond. In fact, my next book will be called:

"1001 Things You Never Wanted to Know about James Bond but were Forced to Find out During the Pandemic."