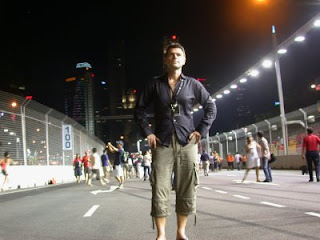 This was just awesome! We have seen Singapore turned party town!
Not only was the race sensational, but also the entire set up for the Grand Prix. Needless to say that everything (at least on the surface) went smooth as silk. The organisers of the inaugrual Singapore GP have done a great job. The spirit of the helpers on track was amazing and I liked the fact that the Formula 1 ticket was a ticket into numerous parties as well (NB: in KL you would have to pay to get into most venues). The only thing I really hated was that there was no live commentary on the radio. Earmuffs with Radio were advertised as "Race Radio" and did cost a fortune. When asked, the sellers told me how cool it is to listen to music at the race. Honestly,... I don't listen to radio when I am in the cinema. You know what I mean...?

Kersten (above) made the trip from Hong Kong, just to see the race. He left Monday morning at 4 to catch his flight back to the office. Thanks to him I actually got to see a lot of sights I haven't seen so far. Like the Cafe del Mar on Sentosa. Now I need to get some sleep.

They pulled it off

Amazining. From zip to Circuit in less than 6 months. When they announced they are having a Formula 1 race in Singapore, I did not think they can pull this off.

Tonight, 24 hours before the free training, the race track is ready, lights, camera and action are good to go and all the access points are clearly labelled. The entire town is brightly lit and abizz with activities.

Nicole can't make it for the race and luckily I managed to sell off her ticket. Kersten is hopping over for the weekend and we are going to see all the action.

Maybe Heiko is right after all?

Heiko (back in Germany) will tell you that Globalisation is not the best thing we have ever come up with. While it is a bit too late to reverse this phenomenom, one has to pause and think about this.

America seems to be falling apart and we all feel the result of it. Established banks all of a sudden collapse, stock exchanges are in turmoil and people around the globe are freightened (those with internet access and money to invest that is). I drove past the AIA office in Singapore this evening. At 22:00 in the evening people were lining up, the que measuring 100 meters, to terminate their contracts and cutting their losses.

Wasn't this kind of scenario what caused the great depression in the past century (the 1930s that is. We should all remember that from History lessons in school). Let's just hope that the interconnectedness will decelerate the fall. Let's hope that the Chinese demand for goods and services from all over the world is going to buffer this global recession. Some say that the recession will not hit Asia so hard as there is a lot of trade going on inside the ASEAN and South East Asia. Let's hope.

That said, one has to wonder, if investments are ever safe. Personally I am saving a lotof my income, hoping to retire early and with a modest amount of disposable income. The last thing I would want to do is to push shopping carts around when I am 70...

As an observation... Singapore used to be "free" from beggars and homeless people. In 2000, living here the first time, beggars were something you just did not encounter. Within two days I was approached twice now, being asked for "donations". This is something new for Singapore.
Maybe this is a sign?

Nicole can't make it to Singapore for the Formula 1 race. Hence I have a ticket too many. I am selling it at cost price. It is for the Grand Stand at Marina Bay.

We were really looking forward as it would have been a weekend full of excitement and with a friend visiting. Sometimes, things get in your way.

Here is a list of my possessions in my "Home" in Singapore:
2 Laptops (work and private)
1 Cheap Matrass from the DIY shop
2 Books (1 on Reseach, 1 on Strategy formation)
1 Toaster, my dear friend which has followed me through 4 courntries on 2 continents
1 Coffe plunger
1 Empty fridge (which is not mine)
Some clothes
a Stone I talk to when I am bored

Today I had to tough task to take our plants outside. As we cannot (well, we could. But quarantene and procedure are more complicated than for a dog) take them to Malaysia, I have given all our two dozen plants away for adoption. A sign on the palm announces that they are up for grabs. Hopefully they will find some caring people that will grow them, talk to them and make them proud parents of beautiful offspring. I am just happy we are not living on the second floor. Man, these plants get heavy over time!

On October 19th we have to hand over our apartment. I will need to see where I can seek refuge as I may have to stay in Singapore for some more days. Later I will check out some bridges to see if there are any good places available to camp. Too bad I don't have a car. Could camp out in front of the office. Like the guy who worked in the dispatch of one furniture company. His wife kicked him out and he moved into a container in the factory.

In 3 weeks time my membership in the fitness center expires, so does road tax for the bike. Place is falling apart and I am in the middleofit!

Singapore is gearing up for the Formula 1 race in about 3 weeks. In the meantime, there is a lot of construction going on. The Motorhomes are ready, grandstands are erected and the tarmac is being redone.

Motorsports are dangerous. Fences should prevent spectators to run onto the track. Thing is, now Singapore looks like one big prison. Fences everywhere. I get a snapshot for you.

Are there any sexy looking fences available?