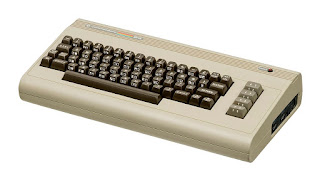 It is amazing what computers have become. When I got my first home computer, at the age of 10, I was the only one in my year at school that had one of these things. There were a few others around and besides trading peeks and pokes, we swapped games. On casettes or on floppy disks. Nobody called us gamers. They called us weirdos. Not Weir DOS (Disk operating system). Several times I was told that "nobody needs that shit!" Look at you now...

Some of us gotten our hands on new games faster. And if you wanted a game, you had to be able to trade. One fella I was trading games with was to be met on a particular bus to school. Floppies were exchanged in that 10 minute ride from the station to school. Where one would then check the nautical maps for "Silent Service" to compare with other "Gamers" where the best tanker fleets were to be sunk in the pacific ocean.

During the final years at school, one had to do an intership. Work placement to see what the real world is like. And what better place to do so than the local computer store. Amazing place, packed with Ode to Joysticks and dustcovers and the rumors of a portable computer, a laptop. Witte Computers has since been closed and a fast food chain has taken that spot.

Back in the days, the Commodore C64 was about 400 DM (200 EUR) and the floppy disk drive about the same. For easier pirating, one needed 2 (!) disk drives. Best with a switch installed to toggle between the device numbers 8 and 9. But I guess these times are long gone and have used their final cartridge.

Here I am today, writing on a laptop that doesn't have a disk drive no more, thinking: maybe I should have done this instead with the money: Alternative to First Computer