Am I excited or what?

Now,... The best news this year was the Michael Schumacher (schuuuuuuuuuuuuumiiiiiiii!!!) is returning. Floyd said so.

Anyway, I got my parents to come to Singapore for the race. And am I excited or what?
Looking at what Singapore put together this year, 2010 will be the biggest party on the planet.
I am going to get tickets for turn 1 or 2.. No matter what (La).

Countdown now. At home. Not in the mood to go out. Bottle of Barcadi with me. Good food and movies... Roooooar 2010!

Other trips that are planned for the coming year: March to Hong Kong, Japan (finally) and Germany.

We are moving and staying 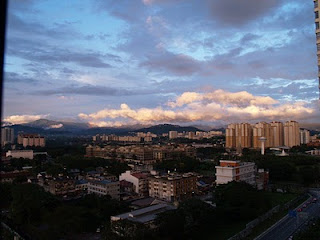 It has been an exciting year. Launchpad turned 1 and we look back at an eventful year. The company has been voted into the top 10 of brand consultancies here in Malaysia (2008, A+M Malaysia). Business is moving ahead fast.

The Saffron, our place of residence, is slowly filling up. We can also see the changes around us. Sentul, which is known as the railworkers town, is slowly becoming a hi-end SOHO type thing.
We decided to stay one more year.

Christmas was a time to reflect and rest. We have not done much but lazing around.

One flies and learns. We were sent to a fair by our client. The location was Duesseldorf.
KLM was the cheapest and was supposed to get us to Duesseldorf.

- Flight to Duesseldorf departed late, hence we missed the connection
- We ended in Amsterdam, next flight to D-Dorf 12 hours later, so we go to Cologne
- Naturally, you have to figure it out all by yourself, little help from the airline
- In Cologne, the staff did not know what was going on
- Eventually, 5 hours late, we arrived in the hotel

- The first flight leaves earlier than scheduled - NO prior notification was given
- Then we learn that we fly to Singapore first, then to KL - NO notification given
- Total delay: 4 hours again, only 1 hour transit time in Singapore
- Compensation: Have to beg for it and figure out an obnoxious web system to claim

Rating: this has been my worst trip of my life.
Yes, flights are delayed and so on, but 2 times on one trip?
And the way they handle it??? Lousy!

Next year I fly Air Asia to Europe!