Aspirations of Someone That has Become a Writer 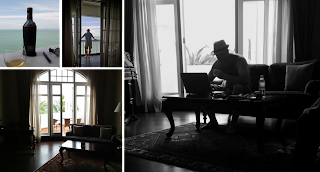 When I was about 17, the "thing" that I thought I gotta have  was a bottle of Ballentines, 17 yo. At that time, I was a big fan of the 3 year old Ballentines, Dimple or Chivas Regal.

Age 20, the Suzuki GSX-R 750 was the object of desire and during studies I wanted a kick-ass stereo once the big bucks come in. Somehow, I must have missed that boat as I never got a job that paid as much as I needed to get that stereo. Anyway, my hearing isn't all that great anymore.

When I roam the hallways of the Eastern & Oriental nowadays, I stop at the wall with the pictures of all the famous people that once stayed there. Many were writers of sorts (Kipling, Hesse, Maugham...)

Meanwhile, the Ballentines has been replaced by a 19 year old Glenfiddich that I want to try. The moped isn't needed anymore. Having been awarded the "Editor of the Year" by MPAS in 2018 was one of many highlights in my career. Now might be the time to put all ambition towards getting a picture on that wall among the other writers. Having stayed there a few times, now I may just need to become famous...