Socar the next debacle? 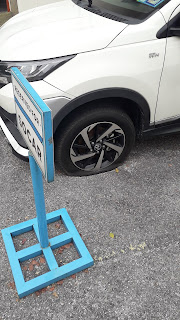 Whenever I went to Singapore on business, they where everywhere. Even in the most remote places. ofo bikes. And I really, really liked the idea. Just to remember, here is what Wikipedia says about them: ofo, was a Beijing-based bicycle sharing company founded in 2014. It used a dockless system with a smartphone app to unlock and locate nearby bicycles, charging an hourly rate for use.

In 2017, it had deployed over 10 million bicycles in 250 cities and 20 countries. The company was valued at up to $2 billion and had over 62.7 million monthly active users.

In 2018, Ofo announced massive reduction in operations, including withdrawing from most US cities and from several entire countries. By 2020, facing a large amount of unpayable debt, the company was no longer operating bike rentals.

While I liked the idea, I never used any of the bikes. For one, the idea of cycling to an appointment was met with a mental image of me being all sweaty. Better to sit in a taxi. As I have been in a state of panic for the last 20 years, never any money on the credit card, which would have been required to ride the ofo bikes. Add to that the fact that I am usually running around with a phone that has no credit to use data. That is on a good day when I have the battery charged.

Picture shown here was taken in our compound where I stay now. I was planning for this post for a while, but I was in no hurry, seeing how this vehicle isn't going anywhere. It has been at least 9 weeks since the tyre subimitted itself to the sad state it is in now.

Note how the car is SUPER-Clean? Yeah, that is because every 2 weeks 2 chaps come and give it a rinse, polish and dusting off. However, I would be sure that the battery is dead by now. My next guess is that the tyre will be changed one fine day and then it is another eternity until someone swaps / charges the battery. Meanwhile, other systems will have issues. Nothing worse than a vehicle that ain't moving about.

Here I am now, thinking: what a great idea, but how is this going to be successful when an asset just sits there and is not only depreciating, but also at risk of damage... Hopefully, these cars will not end up like the yellow ofos that were carted off by the truck load.