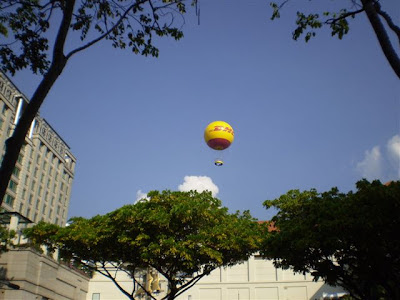 The newspaper reports today that the Singaporean Government has not extended the rights to use the site near Bugis Junction to host the DHL Balloon (Pictured above). We have been on that balloon when Kersten was here last time. Fantastic! Last ride is 3rd August. I am going to miss that huge blimp. Such a nice sight when you sit in your office and the balloon pops up between the high rise buildings. Singapore Ducktours, the operator, was offered a replacement site in Jurong which they politely rejected. Good on them! I would have punched someone in the face for offering a new site away from ANY action. Too bad people coming to see the F1 in September won't have a chance anymore.

LET'S SIGN A PETITION TO KEEP THE BALLOON WHERE IT IS!

In other news: A 19 year old, with a obsessive compulsory disorder with voyourism, was sentenced to give up his mobile phone with a camera for 12 months. He was found to have taken a video of a woman changing in the toilet of the airport. No one said he cannot have a CAMERA! These days they come with video function too and phone calls from the airport to local numbers are free anyway! So you think he will go on playing peeping Tom?